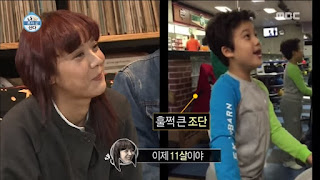 On the March 30th episode of 'I Live Alone', rapper Jessi visited the home of the legendary hip-hop couple, leaving a gift for their son Jordan. As they were catching up, both Tiger JK and Yoon Mi Rae explained how Jordan was apparently going through "the storm and gale of life" these days because he hit puberty at the age of eleven.

"He wouldn't even talk to us," they shared. "He doesn't even start the conversation, ever. He doesn't leave the house."

Back in the studio, Jessi explained how she had really wanted to see Jordan in person, but could not because he refused to come out of his room. "He was doing computer games, and they say he completely ignores them," relayed Jessi.

As a future mother some day, Jessi made the cast members laugh when she shared her own strict rules on child-rearing and discipline: "If s/he doesn't come out of the house like Jordan, then s/he needs a bit of spanking. Pinch 'em, or something."

Email ThisBlogThis!Share to TwitterShare to FacebookShare to Pinterest
Labels: videos

Singer Suran shared her thoughts on working with Yoon Mi Rae and Heize for her comeback album.

On March 22 at 4 p.m. KST, Suran held a concert for her comeback album at the Spigen Hall located in Seoul. Her second mini album “Jumpin'” was released later that day.

“Jumpin'” is a new leap forward for Suran, who has always been walking the same way through her first mini album “Walkin’.” It is an album that portrays her will to continue her path with her own uniqueness. Yoon Mi Rae and Heize featured in it as well.

First, Suran mentioned working Yoon Mi Rae on the song “Wander & Flow,” and said, “When I first made this song, I wanted to sing it with Yoon Mi Rae. With the thought of making my dream come true, I wrote a letter and sent it to her along with the song. She didn’t have to do it, but when she said she would help me, I was thrilled. I’m so honored to have her name on this album.”

Suran To Collaborate With Yoon Mirae For Next Comeback

Suran is gearing up to make a much anticipated comeback, and she is changing things up by collaborating with rapper Yoon Mirae for a track.

Their collaboration, titled “의식의 흐름 (Flow of Consciousness)”, was a song that both artists have worked on for quite some time. The track is described as a trendy R&B pop and hip-hop song, with Yoon Mirae supplying the rap portions.

Aside from Yoon Mirae, Suran is reportedly collaborating with rapper pH-1 and music producer Philtre on separate tracks for her upcoming mini album. These phenomenal collaborations will be released on March 22.

hellokpop
Posted by Mari at 8:45 PM No comments: